The U.S. Setting an American Framework to Ensure Data Access, Transparency, and Accountability Act represents the latest stage of evolution in omnibus federal privacy legislation. The bill is sponsored by Sen. Roger Wicker, R-Miss., who chairs the Senate Committee on Commerce, Science, & Transportation, and co-sponsored by several other Republicans in the Senate.

For the most part, the newly proposed SAFE DATA Act is an updated version of the discussion draft of the USCDPA, which appeared toward the end of 2019.

There are some minor but notable differences between the two texts. The SAFE DATA Act expands the USCDPAâ€™s definition of â€œdeidentified dataâ€� to include â€œinformation that â€¦ does not contain any persistent identifier or other information that could readily be used to reidentify the individual to whom, or the device to which, the identifier or information pertains.â€� Also, the definition of â€œbiometric informationâ€� that was included in the discussion draft of USCDPA is not found in the SAFE DATA Act.

Titles II and III of the SAFE DATA Act, however, differ markedly from their predecessors. Namely, Title II contains a new section concerning â€œfilter bubble transparency.â€� This section of the SAFE DATA Act, as well as the definitions for â€œalgorithm ranking systemâ€� and â€œconnected device,â€� all come from the Filter Bubble Transparency Act, which is a bipartisan piece of privacy legislation that was introduced in October 2019. It was sponsored by Sen. John Thune, R-S.D., and co-sponsored by Sens. Richard Blumenthal, D-Conn., Jerry Moran, R-Kan., Marsha Blackburn, R-Tenn., and Mark Warner, D-Va.

Primarily, the Filter Bubble Transparency Act would require that certain platforms notify users if their personal data is used to select the content they see using an â€œopaque algorithm.â€� Platforms must also provide users with a version that uses an â€œinput-transparentâ€� algorithm.

Meanwhile, the SAFE DATA Actâ€™s section on â€œunfair and deceptive acts and practices relating to the manipulation of user interfacesâ€� in Title II, as well as its definitions of terms such as â€œbehavioral or psychological experiments or researchâ€� and â€œcompulsive usage,â€� come from the DETOUR Act, another bipartisan piece of privacy legislation that was sponsored by Sen. Warner and co-sponsored by Sens. Thune, Amy Klobuchar, D-Minn., and Deb Fischer, R-Neb.

The DETOUR Act would regulate so-called â€œdark patterns,â€� which are ways of structuring the interfaces and information presented on websites so as to nudge users in divulging more personal data than they would otherwise. The main provision of the law would prohibit companies from obtaining consent or user data through interfaces that â€œobscur[e], subvert[], or impair[] â€¦ user autonomy, decision-making, or choice.â€� The bill would also prohibit companies from encouraging â€œcompulsive usageâ€� in any person under the age of 13. Lastly, the bill would place additional public disclosure obligations on companies that perform behavioral or psychological research based on the data or activity of users, as well as require them to establish independent review boards. 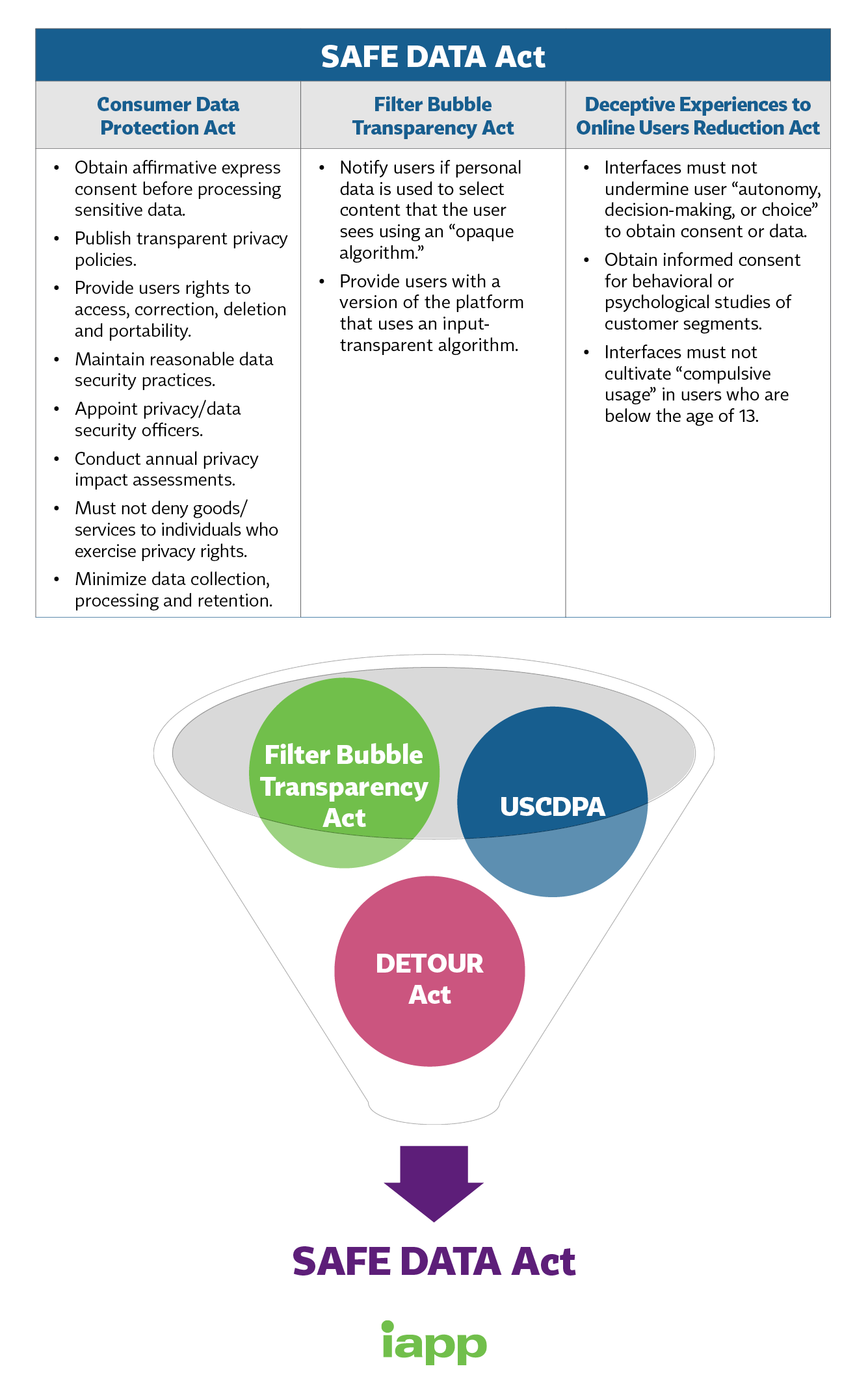 Title IV of the SAFE DATA Act also includes a section that would empower the FTC to seek a permanent injunction and other remedies in the case of violations.

In a Brookings Institution report issued in June, the authors stated â€œcomprehensive information privacy legislation appears stalled on Capitol Hill,â€� due mostly to â€œa few pivotal and more polarized issuesâ€� around which a consensus has been hard to forge. Namely, the two key dividing lines are whether federal privacy legislation will include a private right of action and preempt state laws that offer a higher standard of privacy protections, such as the California Consumer Privacy Act.

Unfortunately, these issues have not been resolved in the SAFE DATA Act. However, the bill may still be a harbinger of the long-awaited consensus around federal privacy legislation. Indeed, the SAFE DATA Act has the potential to assemble the largest bipartisan group of Senators around a federal privacy bill to date. Yet, it still lacks many of the legislative proposals that have been developed by key Senate Democrats, including Sens. Maria Cantwell, D-Wash., Brian Schatz, D-Hawaii, Klobuchar, and Edward Markey, D-Mass.

Although the passage of federal privacy legislation this year remains â€œa long shot,â€� a hearing entitled â€œRevisiting the Need for Federal Data Privacy Legislation,â€� will be convened by Sen. Wicker Sept. 23 to focus on state privacy laws, the EU General Data Protection Regulation and the impact of COVID-19. The four witnesses are all former Federal Trade Commissioners: Julie Brill, William Kovacic, Jon Leibowitz and Maureen Ohlhausen. It will be worth tuning in to this hearing to stay informed on any potential movement forward on Capitol Hill toward a comprehensive U.S. privacy bill.

Photo by Quick PS on Unsplash